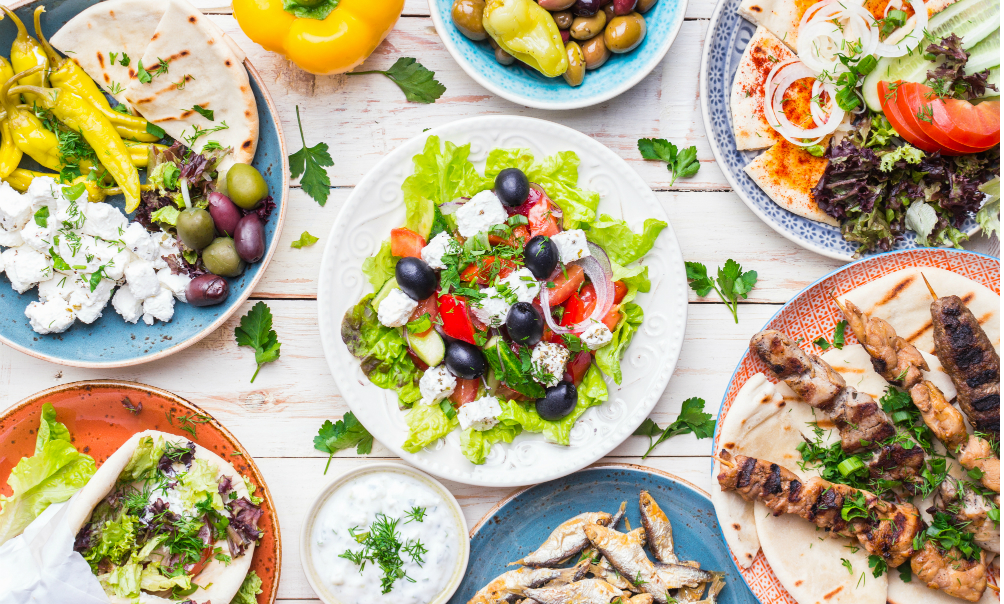 America is a land of diverse cultures and groups of people. There has been integration and fusion of the various aspects of their lifestyle, especially the food. Greek-American cuisine is one such and is prominent in places like New York, Chicago, Detroit, Florida, and Baltimore. That’s because they have Greek towns and districts where immigrants from Greece majorly settled.

Various Greek restaurants exist across the country. Even though some are more popular, they have fantastic menus and meals for kids to try. They include the Ava Madison Estiatorio in New York, Taverna in New Jersey, Greek Islands in Chicago, and Kapnos in Washington DC. They provide upscale Greek dining experiences and have different specialties.

Greek foods generally consist of vegetables, grains like wheat, pasta, cheese, yogurt, and olive oil. For proteins, it’s mostly fish and meats like pork, beef, and lamb. Then for desserts, they use honey, nuts, fruits, and thin pastries. Olive oil is an essential ingredient in these dishes. Also, they majorly use spices like oregano, fennel, dill, and bay leaves.

For people who prefer home-cooked meals, these Greek dishes are easy to prepare. The internet is replete with various recipes that you can follow to recreate them at home. The same way it is with riding a bike or playing Ping-Pong, constant practice helps perfect your cooking skills. We’ll discuss a few of these Greek cuisine and their primary ingredients subsequently.

This dish is comfort food made of pasta. It’s also known as pasticcio and traditionally consists of layers of pasta, minced beef and bechamel sauce. Due to the similarities, some people refer to it as the “Greek lasagna.” The pasta is usually bucatini, but ziti or penne are okay substitutes. The sauce is smooth and creamy, similar to that of Italian Bolognese.

The Saganaki is a gourmet appetizer prepared in a small frying pan. It’s made usually of graviera, halloumi, feta, or a few other kinds of cheese. The chef flambees the cheese at the table and extinguishes the flame with the juice from a fresh lemon. It’s crisp outside and soft inside, and they serve it with bread.

Souvlaki is a grilled dish that’s mostly fast food. It consists of meat and vegetables, usually roasted on a skewer. You can eat them alone, but most people serve them with side dishes like fried potatoes, bread, and sauces. The Greeks originally made it using pork; however, people use chicken more frequently. Other substitute meats include beef, lamb, and sometimes fish.

It’s a well-known appetizer dip made from strained thick yogurt, cucumbers, olive oil, salt, garlic, and herbs. You can eat it with vegetables like eggplant and zucchini or use it as a sandwich spread. The thickness of the yogurt causes you to get full quicker, and this helps to prevent eating much. There are some variations of this dip, and some people serve it as a cold soup.

Tirokafteri, also known as ktipiti, is a spicy cheese dip or spread. It consists of feta cheese combined with at least one other white cheese. Other ingredients include roasted peppers, yogurt, olive oil, oregano, garlic, and lemon juice. Most times, it’s part of an appetizer platter, but it can be eaten alone with warm bread.

This salad originated from Greek farmers who grew tomatoes and cucumbers. That’s because they took breaks to eat tomatoes, cucumbers, and olives while working. Hence, those are the primary ingredients alongside onions, feta cheese, and caper berries. For the dressing, it’s olive oil and oregano, salt and pepper for seasoning. It’s usually eaten on its own.

This meal is sandwich-like and has alternative names, which include ntakos and koukouvagia. It consists of dried bread, herbs, feta or mizithra cheese, tomatoes, olives, oregano, and sometimes pepper. It’s similar to the Italian bruschetta, and you may replace the bread with barley rusk. Dakos is a traditional Greek appetizer and is easy to make.

Gyro is comparable to tacos or shawarma and originated from lamb kebab. However, these days, pork, chicken, or beef is the meat of choice. So the gyro is meat, tomatoes, onions, and tzatziki sauce wrapped in a pita. They season the meat with various spices and roast them on a vertical rotisserie. Then they grill the pita lightly after filling.

There are various kinds of pita, but they’re substantially flat yeast-leavened pieces of bread. Although people call most flatbreads pita, they’re different and have their respective names. Pita is the most well-known type of Greek bread, and it has widespread usage. They can make pita chips, eaten with sauces and dips, or used to wrap sandwiches.

They’re crispy, finger-sized butter cookies, which are also known as Greek Easter cookies. That’s because they traditionally make them for Easter Sunday. They’re typically orange-scented and are hand-rolled and twisted. They’re then glazed with egg and sprinkled with sesame seeds. They pair well with hot chocolate or a cup of coffee for a perfect Sunday brunch.

Kotopita is Greek-style chicken pot pie. The crust is filo dough – thin pastry sheets layered with butter. For the filling, they mix shredded chicken with feta cheese and bechamel sauce. The other ingredients include egg, flour, milk, nutmeg, ground pepper, salt, dill, garlic, and onions. The pie is known to be savory and is the ultimate comfort food.